This site is about my boat Skíðblaðnir, our sailing trips and other seaborne adventures on traditional sailing craft or kajaks. 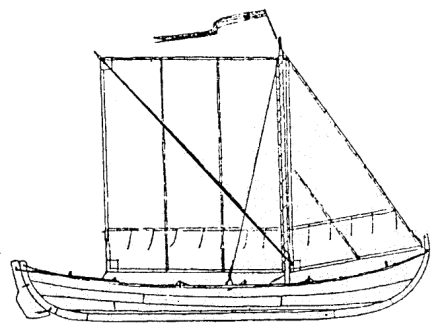 About the skipper & owner: From my early childhood I can still remember an old oil painting in a gilded frame, hanging behind my grandfather’s armchair. It depicted a grim looking grizzly old fisherman; almost as grim looking as my grandfather who usually drummed with his nine fingers on the armrest accompanied by a hornpipe-like whistling. He wore a southwester and smoked a pipe and the background was pitch black. Back then I was marvelling about the fisherman’s grim look, perhaps because you were obliged to smile when photos were taken, but I sensed somehow the distinctiveness of the mindset in the old times, accompanied by untold tales of hardship and adventure. Later I was drawn to novels about our pirate Störtebecker, who – according to my father (a naval architect) –  hid a treasure in the Harburg mountains close to where we lived. Later I read all Hornblower novels and finally reached the Aubrey & Maturin series. Although reading was very rewarding in itself, I longed to get immersed into similar sea adventures myself. I had already taken up sailing at the age of thirteen, when my parents gave me an optimist dinghy, which was fun, although I could never identify with the box-shaped hull. In my mind, a proper hull had to be racy with an elegant sheerline. In my early twens I used to sail as skipper on my youth group’s dinghy cruiser on the Elbe River – often from Elmshorn to Hamburg or Glücksstadt. Then I discovered Clipper-DJS and sailed several times as deckhand on the topsail-schooner AMPHITRITE (built in 1887, Gosport, UK) and the gaff-ketch SEUTE DEERN (built in 1939, Svendborg, DK). I also volunteered in the maintenance and repair works in winter, as I liked the pan-generational community and comradeship so much, and found myself in the bosun’s chair being pulled to the top of the mast with a bucket of tar & tallow to apply it to the shrouds as protective coating. Damn…I nearly hit my head at the crosstrees when I was pulled up and it looked far higher from above than from the deck. But it was a truly magnificent experience.

In the following years I went to England to do my Masters at the University of Southampton in Maritime Archaeology. On one of my university’s projects we carried out an underwater archaeological survey on late 19th-century shipwrecks in Swedish waters and (after it was discovered that I had a certain talent in underwater-sketching) I was asked to make sketches of the bow section and some broken off parts of the mast with crosstress, which I certainly remembered from another context. What was so fascinating to me was that I sailed on a vessel from roughly this period and could picture this ship in action, despite the murky green veil of the Baltic Sea.

After graduation in 2005, I worked as archaeologist in Ireland in the following year and joined the Atlantic Challenge South East in Waterford, to sail on this group’s Bantry Bay gig AN SEABHAC MARA. In 2007, I sailed as deckhand on the GRÖNLAND (built in 1867, Skånevik, NO) to Norway, which was the research vessel of the first German North Polar expedition in 1868. Especially while visiting small local maritime exhibitions in Norway and the Shetland Isles, my longing to have an own traditional vessel became immesurable. When I learned that an acquaintance wanted to sell his boat, a traditionally built smakke, I grasped the opportunity with both hands and scraped together the little money I had earned as archaeologist. In fact, I was fiscally irresponsible and basically spent everything I had, and when the boat was to be sold, I couldn’t get time off to drive to Denmark (I was working in England then), so I declined a contract extension and basically thus quit my job in order to fulfill my dream. Clearly one has to have priorities in life! Few months later, I was hired again and returned to England, while leaving behind my boat in Germany on the trailer, forming dry cracks. Upon my return, I was surprised that I could stick a finger through some of the dry-cracks and experimented to caulk the cracks with pitch. Eventually, just putting the vessel into the water and letting the planks swell proved to be sufficient and not much caulking was required after that. Today I am doing my PhD at the University of Kiel and sail frequently on Kiel Fjord and take part in the annual RumRegatta in Flensburg. In the future (i.e. as soon as I can afford), I would like to undertake sailing expeditions in the Scottish lochs, the Norwegian fjords and the Swedish archipelagoes, as in 2010, where we followed a leg of a Danish itinerary from the 13th century.